Yet more fuckwittery from TFL and LOCOG, I presume: this time it’s the Olympic Route Network which shows the already-busy routes that will be completely messed up by bussing all the VIPs around in their 4,000 chauffeured BMWs – oh and maybe one or two athletes who aren’t staying on site at the Villages for some unknown reason.

So here’s a map of the routes: London 2012 Olympic Route Network (PDF)

“Some road race events including the Cycling Road Race, the Triathlon and the Olympic and Paralympic Marathons, will take place on sections of the Olympic or Paralympic Route Network (ORN/PRN). During these events, which are mostly at weekends, some parts of the ORN/PRN will be closed and an alternative ORN/PRN route will be in place.  These alternative routes will be open to all general traffic. However, there will be some temporary traffic changes, including changes to traffic signal timings, on these roads so that athletes, officials, media and key Games workers can get to events on time.”

No news as to what other traffic changes will be planned if us common people are supposedly still allowed to use them. And there’s another map for us to look at showing these ORNs … which doesn’t tie-up with the AORNs on the first map, of course: where’s Jamaica Road, etc.?

Confused? You will be…

I was interested by the evolving story of how a policeman from Greater Manchester Police managed to spectacularly wreck a new VW Golf R in the wee small hours of the morning recently.

It started with a report on the BBC News website that told us that:

The driver was taken to hospital and treated for a back injury.

A Greater Manchester Police spokesman refused to reveal details of how the crash happened.

He said that “as a result of the incident, GMP is reviewing its policy on officers test driving cars”.

The officer, who has recovered from his injuries, is currently suspended from driving duties while an internal investigation takes place.”

The photo of the car shows just how much damage was done: not just a little bit of superficial damage as you might expect from a shunt on an urban road. 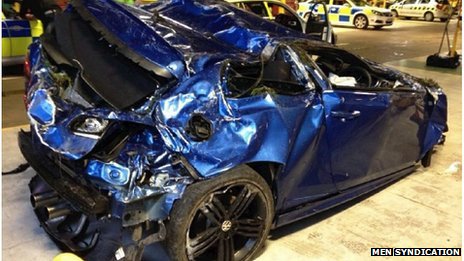 It'll polish out with a bit of T-Cut

Now Section 19 of the Road Safety Act 2006 amends Section 87 of the Road Traffic Regulation Act 1984 which grants police an exemption from speed limits when a vehicle is being used for police purposes. “Police purposes” is a pretty wide-ranging description but you do have to wonder what on earth this officer was doing at that time of the morning at the sort of speeds he must have been doing to cause that sort of damage whilst, apparently, testing the car for possible police use.

But the story gets better: apparently the driver was PC Paul Fletcher who was regularly seen on the TV programme “Car Wars” doing high speed chases. 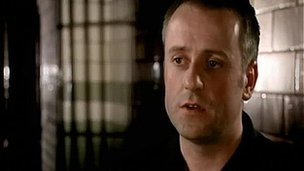 And GMP stated that no other vehicle was involved, despite emerging reports that in fact the whole thing was caught on camera by another high performance car out at the same time on the same piece of road when PC Fletcher – a trained driver, remember - lost control on a roundabout. Hmm. Racing each other, perhaps? That’s surely what the police would say if you or I were doing the same thing?

Greater Manchester Police are, supposedly, reviewing their policies in this regard but surely testing a vehicle would be better done on, say, the MIRA test facilities which are purpose-built for such testing?

Maybe next time I get a pull for speeding – at a significantly lower speed than that which would have led to a car being written off so badly as the Golf – I could just say I was testing its suitability? Ah wait: I don’t have the exemption they’ll be hiding behind whilst driving as dangerously as they do…

Welcome to Blue’s Big Trip: it’s a blog set up for my trip across the USA in the summer of 2012.

I intend to take my 2002 Kawasaki ZRX1200R from the UK by airfreight to Anchorage, Alaska and then from there ride down via Seattle – where I have family – to Los Angeles and then via Las Vegas and New Orleans over to New York, from where I’ll airfreight the bike back to my home in London. Along the way, I hope to take in a bit of sightseeing like the Grand Canyon and some bike-specific ones like Deal’s Gap in South Carolina.

By the summer of 2012, I will have reached the grand old age of 50 and London will be a hellish place to be with the London 2012 Olympics taking place. I’ve always wanted to do a big trip and so then will be as good a time as ever, I reckon. I’m aiming to take 2 or 3 weeks to do this trip which should be very do-able: I’ve done 900 miles in a day in 1981 on a Triumph T140V Bonneville, a few more trips every year like that to the Bol d’Or at the Circuit Paul Ricard in the late 80s and early 90s on a Yamaha FZR1000, and more recently 1,000 in less than 24 hours on the ZRX1200R and my Honda Fireblade.

Feel free to join in and give me some suggestions for routes, places to stay, etc

The Lincoln office of the Driver and Vehicle Licensing Office have apparently built up a backlog of registrations, etc. Which means that due to their incompetence and inability to cope with what should be planned demand, I cannot get a tax disc or get the personalised registration number for my new car. And that means that I cannot pick up my new car.

So I thought I’d ring them to find out the status. The website for the Lincoln DVLA local office says:

Please note, all calls are handled initially by our call centre based in Swansea.”

Which would be fine, if DVLA Swansea actually answered their calls. The recorded message I got today says that due to high call demand they cannot answer my call and so it hung up the call.

So Alastair Darling has announced a new plan to offer a £2,000 discount if you trade in a ten year old car and buy a new one. Woohoo!

Now then, let’s have a little think about this. I drive a 1999 Ford Mondeo ST200 which would qualify in a few months’ time. I bought this second-hand at less than a year old and got a whopping discount off the new price. So woohoo! Let’s go and buy the new equivalent Mondeo.

Except there’s not really an equivalent, but there is a 2.5L 220PS version though not as nice looking.

So let’s do the sums: the Government discount of £2,000 is probably £1,000 more than mine’s worth. So I’m up £1,000. Then I would pay £350 more for tax in the first year, so I’m only up £650 now. And that’s around a 2.3% discount in real terms. No doubt the dealers won’t want to add their own discounts on top of this if they can help it and of course buying new and turning the wheels would lead to a huge reduction in value that would dwarf that discount.

And of course every year I’d be worse off because the VED is higher on the new one than the old one.

If I go for more of a performance car then the numbers simply don’t stack up especially as the first year’s VED would go as high as £950!

The most recent example of this prejudice and discrimination comes from those well known haters of all things motorcycling – a Welsh police force. Their latest anti-motorcycle act is to effectively ban the annual Welsh National Motorcycle Show because:

“Dyfed-Powys Police are of the view that there is a significant risk of violence at this year’s Welsh motorcycle show.”

Surely on that basis the police should be cancelling all football matches? After all, as we saw with the UEFA Cup Final match in Manchester, there is more than a significant risk of violence with football matches. But amazingly, they are never cancelled. I wonder why? Could it be that the perception – reinforced by the police, Government and the media – that motorcyclists are all troublemakers and lawless?

After all, the House of Commons Public Accounts Committee stated that:

“If the DVLA’s motorcycle enforcement regime is not to be a complete laughing stock, then the agency and the department must make the most of new powers to enforce VED on public roads.”

They must also “strongly consider more severe measures such as impounding unlicensed motorcycles”, he said, adding: “Large parts of the biking community are cocking a snook at the law.”

I recently received my renewal documents for my car insurance through Norwich Union Direct: £404.17 (with £220 excess), so up a bit on last year.

We had also insured my wife’s car with Norwich Union Direct and after changing the car had had a horrendous time trying to obtain a quote for the new car as that policy too was due for renewal. We eventually received a quote for that of £200.00. Through the Post Office, we’d got insurance for £150-ish with a further £50 cash-back to come after 60 days. The new insurer? Norwich Union…

So I thought I’d do a reality check on my renewal through the Post Office. £304.69 (with an additional £50 cash-back to come) and only £100 excess. The insurer? Yes, you’ve guessed it … Norwich Union!

Oh and when I rang to cancel the direct debit for my old policy, they asked if there was a way they could look at my renewal quote to get it down. I said no. Too late: “you snooze, you lose”.

Courtesy of Creative Review Blog, comes a link to the new Honda ad which I reckon is pretty interesting and captures the attention. And unlike CR Blog, I don’t find the voiceover patronising.

As chance would have it, on The Rev Counter today there was a thread about personalised/cherished/vanity numberplates.

I have a couple of them: one for the car and one for the bike. I was lucky enough to get them directly from the DVLA a few years back. It’s interesting to see what similar plates are worth and one way to do this is to visit one of the website runs by sellers/brokers of numberplates.

I have found in the past that the amount some brokers will offer you for your numberplate is way below what they will seek to sell it for, pocketing the difference for themselves rather than taking a flat fee or a percentage of the sale value. One leading company did just that when I approached them: the difference was many thousands of pounds…

Anyway, I’ve since found out about Cape Plates who offer a free valuation service as well as offering to sell your plate for you;  they’ve also got a nice selection of Irish number plates for sale if your budget doesn’t stretch to a full-on cherished number. And yes, I will be paid a nominal amount to mention them and no, it doesn’t mean I’m writing this with a positive spin.

I wonder what their valuation would be of my two plates; 2000 RM and 3 RHM?

I’m a tad miffed: a favicon I prepared for The Revcounter han’t been used there. Oh the humanity!

June: None in the diary … yet!

August: None in the diary … yet!

November: None in the diary … yet!